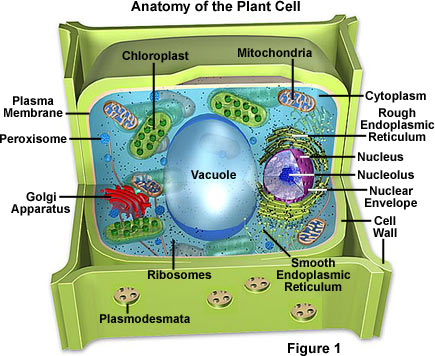 Cell Membrane: The cell membrane allows certain molecules to enter or leave the cell. It separates internal metabolic reactions from the external environments. It also allows the cell to excrete wastes and to interact with its environment.

Nucleus: The nucleus communicates with the surrounding cytosol via the numerous nuclear pores. It also houses and protects the cell’s genetic information.

Nucleolus: The nucleolus is where DNA is concentrated when it is in the process of making ribosomal RNA.

Ribosomes: The ribosomes direct protein synthesis in the cytoplasm.

Cytosol: The cytosol is the “soup” within which all the other cell organelles reside and where most of the cellular metabolism occurs. The cytosol is full of proteins that control cell metabolism including signal transduction pathways, glycolysis, intracellular receptors, and transcription factors.

Centrosome: The centrosome is an area in the cell where microtubles are produced.

Golgi Apparatus: The golgi apparatus is a system of flattened, membranous sacs. The sacs nearest the nucleus recieve vesicles from the ER containing newly made proteins or lipids. The stacked membranes modify the vesicle contents as they move along the golgi apparatus. The protiens get “address labels” that direct them to various other parts of the cell.

Endoplasmic Reticulum: The ER functions primarily as an intracellular highway, a path along which molecules move from one part of the cell to the other. The Rough ER produces phospholipids and proteins. These proteins are later exported from the cell or inserted into one of the cell’s own membranes. The Smooth ER builds lipids such as cholesterol. It also produces the steroid hormones estrogen and testosterone.

Lysosomes: The lysosomes contain digestive enzymes which break down large molecules, such as proteins, nucleic acids, carbohydrates, and phospholipids.

Cytoskeleton : The cytoskeleton is a network of thin tubes and filaments that give shape to the cell from the inside.

Plant cells have three kinds of structures that are not found in animal cells and that are extremely important to plant survival: plastids, central vacuoles, and cell walls.

Cell Wall: The cell wall is a rigid layer that lies outside the cell’s plasma membrane. Plant cell walls contain a carbohydrate called cellulose. Pores in the cell wall allow water, ions, and some molecules to enter and exit the cell.

Plastids: They are organelles that are surrounded by a double embrane and contain their own DNA. Chloroplasts are a type of plastid. Chloroplasts use light energy to make carbohydrates from carbon dioxide and water.

Central Vacuoles: The central vacuole is a large, fluid-filled organelle that stores not only water but also enzymes, etabolic wastes, and other materials.

← Oxygen Transport from Lungs to Cells
Cell Organelles and their Function →

7 responses to “Cellular Components of Animal and Plant Cells”