RSS
← The concept of Inertia
The Principle of Conservation of Momentum →

The concept of momentum

We all know that a heavy truck is harder to stop than a small car moving at the same speed. We state this fact by saying that the truck has more momentum than the car. By momentum we mean inertia in motion or, to be more specific, the product of the mass an object and its velocity:

Momentum is the product between mass and velocity. Being a vector quantity, it has a direction, and the direction is very important when doing momentum calculations. Momentum is not a thing that we can see, but it does explain many things that go on in physics.

An important principle:
The total momentum of a system remains constant provided that no
external forces act on the system.

This has important implications in the study of collisions. In simple terms, we can say that the total momentum before = total momentum after. The key thing is that share of the momentum may change. 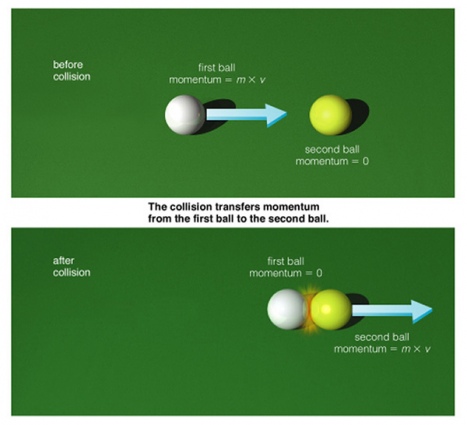 If some kinetic energy is lost, converted into heat or light, then the collision is inelastic.

← The concept of Inertia
The Principle of Conservation of Momentum →